At the height of the fracking protest in Balcombe in 2013 I went to hear Mark Stevenson http://markstevenson.org , author of ‘An Optimists Tour of the Future’ speak at Forest Row Village Hall.  Mark delivered a fascinating overview of future technology and the energy sector.  He had a very clear ‘take’ on fracking and the other extreme unconventional means of extraction of gas, oil and coal – such as deep water drilling, tar sands extraction and mountain top removal.  It is that these are the desperate and dying acts of an outdated technology that is rapidly being replaced by renewable energy – especially solar energy.  Solar energy has the potential to re-order society because it can be home produced thus cutting out the ‘middle man’. 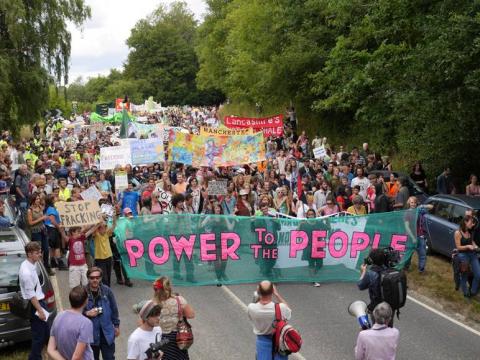 So it was surprising and disappointing to read a few weeks ago of the decision of the planning committee of North Yorkshire County Council to approve plans put forward by an outfit called Third Energy to frack for gas at a site near Kirby Misperton in Ryedale.  Yes the frackers are back like the undead from a Hammer Horror movie.  The councillors who voted in favour probably thought they were voting for the future when they were in fact voting for the past.  Fighting this polluting and dangerous industry, which is designed to make a few people a ‘fast buck’ at the expense of everybody else, before it is stopped is both a local and a national fight and the decision in Yorkshire could have implications here.

Hopefully the relentless and inevitable march of renewable technologies will squeeze out this nasty industry (which would industrialise our countryside and threaten our health, water supplies and wildlife) before it gets properly established in the UK.  Here’s a link to an article about how wind energy is becoming mainstream in the USA (and as we all know we’ve no shortage of wind in the UK) http://www.slate.com/articles/business/the_juice/2016/05/the_windpower_expo_demonstrated_that_wind_energy_is_finally_corporate_and.html

Leave the hydrocarbons in the ground.  It’s where they belong.