‘Modernism’ in architecture emerged in the early part of the twentieth century.  It has developed many strands but the common themes are functionality, rationality, man made materials, factory made components and a lack of ornamentation. In Britain it has always been met with an ambivalent, even suspicious, attitude – similar to the attitude held by many nowadays towards the European Union – a fraudulent foreign intellectual exercise!

Whilst the latest iteration of ‘modernist’ architecture is just about acceptable nowadays for certain buildings such as schools and hospitals it is still rare to see it used for privately owned houses.  It is even rarer to see that sub-species of the ‘modernist’ house – the ‘glass house’.

Other designed objects such as ‘Concorde’, sports cars, laptop computers, fashion etc can all be totally ‘modern’ but when it comes to ‘home sweet home’ the response is generally a polite ‘no thank you’.  This is probably for a complex set of reasons that include our national traditions and character, our insularity as an island nation and the fact that privately owned houses are the main asset that many families possess so need to be ‘marketable’ (ie ‘traditional’).

I reflected on this when I read of the death of the London ‘modernist’ architect John Winter.  He is best known for the Cor-Ten steel (a ‘rusty’ carbon steel) and glass house that he built in Highgate in 1967-69.  This was one of a celebrated group of steel and glass houses built in this mature part of north London which included Michael Hopkin’s house in Hampstead (1976) and Spence and Webster’s pair of courtyard houses in Belsize Park (1978).  I was lucky enough to work for Spence and Webster in one of the Belsize Park houses when I came to London in 1985 – 86 when they used it as an office.

These houses were ‘tolerated’ by being almost invisible (the Spence and Webster houses are hidden behind a tall wall) or neutral (the Hopkins House is see through / reflective as if it somehow isn’t really there).  Contrast this with America where the ‘glass house’ is a celebrated cultural phenomenon dating back to the ‘granddaddy’ of all ‘glass houses’ – the Farnsworth House by Mies van der Rohe (1945-51).  This famous line runs through the Eames House (1949), Philip Johnson’s ‘Glass House’ (1949) and, my favourite, the Stahl House by Pierre Koenig (1959) which sits in the Hollywood Hills with a commanding view of Los Angeles below. 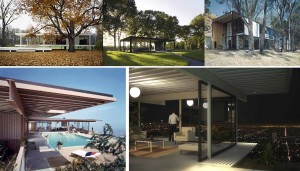 What does the future hold for people who want to live in ‘glass houses’?  There is certainly no technical impediment since glass technology has kept one step ahead of the demands of the Building Regulations for low carbon design through triple glazing with argon / krypton / xenon gas filled cavities and warm edge spacer bars, solar control and low emissivity coatings.  Flat roofing technology, insulation materials and steel coatings are vastly superior to what they were in the days of the early ‘modernists’.  The main impediment to building a ‘glass house’ is confidence and desire and the commissioning of a high quality design that will obtain planning permission.

© 2016 Miller | Architects. All rights reserved. | Cookies Policy | Website by Bolnore Web Design Sussex
We use cookies to ensure that we give you the best experience on our website. If you continue to use this site we will assume that you are happy with it.OkRead more