Whereas early golf courses were laid out to follow the ‘lie of the land’ modern golf courses have ‘architects’. Large sums of money are spent to manipulate the topography of the landscape and introduce trees and water features.

Take the venue of this year’s Ryder Cup – the ‘L’Albatros’ course at ‘Le Golf National’ in Paris designed by architects Hubert Chesneau and Robert Von Hagge in collaboration with Pierre Thevenin. What started out as a flat wheat field was transformed using material from demolition and excavation sites in the Paris area. Over the course of three years in the late 1980’s, 400 trucks per day imported 1,600,000 m3 of material which was combined with 600,000 m3 of soil excavated on site to create a completely new landscape. The course was further modified and improved in advance of the Ryder Cup and then manicured to within an inch of its life for the big event itself. 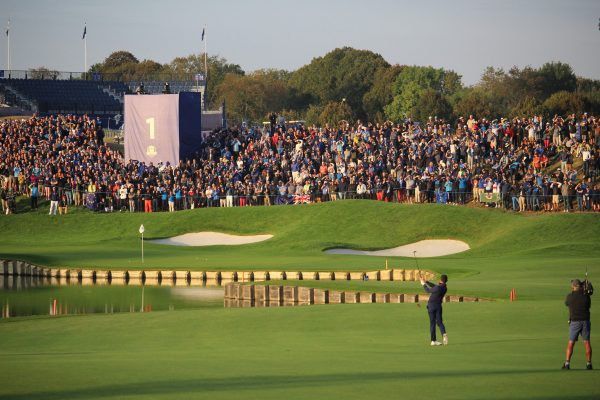 Part of the skill of a golf course ‘architect’ is creating drama with the best hole often being the final hole. At the ‘L’Albatros’ the 18th hole is a stunner with water on the left, pot bunkers on the right and a semi-island green. Mais quelle deception! – the Ryder Cup is match play golf not stroke play golf meaning that matches often end before all the holes have been played. On this occasion only six of the twenty eight Ryder Cup matches actually played the final hole. Still it looked pretty in the photographs even if it hardly featured in the golf.

Many moons ago I crewed on an ocean racing yacht during Clyde week that had been designed for, and competed in, the three-quarter ton cup in Norway. It was specifically designed for the anticipated wind and sea conditions. I asked the skipper how it had fared. ‘Not well’ was the reply. The wind and sea conditions turned out to be completely different from what was anticipated when the racing took place. As Robert Burns put it in 1786 ‘The best laid schemes o’ mice an’men/ Gang aft a-gley’.