Most of us love a summer heatwave – the chance to imagine for a few days that we are living in the south of France. 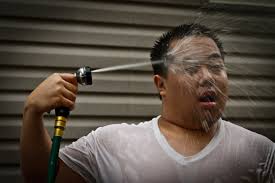 Heatwave – one approach (not recommended)

Me included – but my attitude changed a bit when I heard Professor Kevin Lomas of Loughborough University on BBC Radio 4’s ‘You and Yours’ (2 March 2017) outline research published in the Building Research and Information Journal which describes future heatwaves as a ‘public health disaster waiting to happen’ on account of building ‘overheating’ www.tandfonline.com/doi/full/10.1080/09613218.2017.1256136.

The quest for building energy efficiency through heavily insulated walls, windows and roofs and reduced ventilation has led to buildings which are positively dangerous in heatwave conditions. The European heatwave of 2003 led to the premature deaths of around 15,000 people and with climate change causing warmer summers and more frequent and intense heatwaves deaths related to ‘overheating’ could triple by 2040. The risk due to the way some modern buildings are constructed is combined with higher external air temperatures (due to global warming) and an aging population (who are more susceptible to the effects of overheating). The risk is increased in cities and in building types such as houses, care homes, hospitals and single aspect blocks of flats especially where there are large unshaded glass areas and low levels of ventilation. Professor Lomas argues that the Building Regulations need to consider climate change and the effects of overheating and poor air quality not just thermal insulation and ventilation.

It seems to me that we are suffering or about to suffer from the effect of bad, cheap and ill considered buildings. Architectural science is not rocket science and there is no excuse. I speculate that the reason has been a lack of thought, even common sense, at the design stage combined with a low design and construction budget and the the use of ‘lightweight’ (usually timber frame) constuction. The performance of a building needs to be thought through before ‘the first turf is cut’ not in retrospect or by trial and error as the work proceeds. Buildings need thermal mass in the form of ‘heavy’ concrete floors, brick chimneys etc. to store heat and provide ‘inertia’ against temperature fluctuations, they need shading to windows and the facility to allow windows to be opened at the right times to allow fresh air to pass through the building. They need adequate levels of general background ventilation. Airtight windows are in my opinion potentially deadly to the old and the very young and for that reason I have never been comfortable with the low levels of ventilation promoted by the ‘Passivhaus’ ultra-low energy standard.

Given that there are those who will only ever do the minimum necessary under the Building Regulations there will need to be a new regulation to prevent the construction of buildings that are highly likely to overheat in the summer.