I joined the ‘Unite for Europe’ march in London on a beautiful crisp sunny spring day last Saturday.  It was a perfect day for it and a perfect opportunity for a traffic free stroll at a safe and leisurely pace down the middle of some of the best streets in Westminster – Park Lane, Piccadilly, St James, Pall Mall, Trafalgar Square, Whitehall and Parliament Square. I know from attending football and rugby matches what a 50,000 crowd looks like and this crowd looked like twice that. 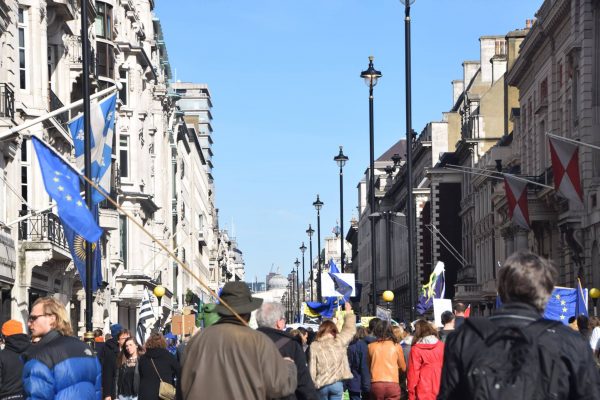 When we move around cities we tend not to look up in case we walk into something or get run over but this march offered the perfect opportunity to take in some amazing architecture afresh and enjoy the drama of such large and colourful crowd in an impressive streetscape. So much of these streets is built of Portland limestone that it felt like the march was snaking through canyons carved out of a single solid stone block. In a way the streets really are that – the big block that is Portland island. I visited one of the quarries there a number of years ago to select stone for a building in the City of London and delighted in standing at the foot of it with fresh air above my head where once existed the stone from which whole swathes of London were built. The consistent use of Portland stone throughout parts of the heart of London allows buildings of varied styles and uses to sit happily together. In fact the uses are unimportant in terms of the creation of urban ‘fabric’ they are just the ‘stuff’ that sits behind the façades which may change over time (say from a bank to a café). 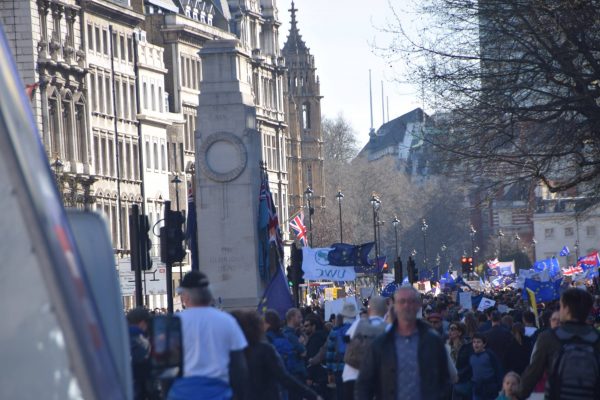 Whilst many of the facades along the route we took are superb in themselves the most impressive part of it is that they all contribute to an almost continuous frontage which is greater than the sum of the parts. Place making and public space making – city streets and squares where each building is subservient to the whole. The opposite is an architectural ‘zoo’ where ‘object’ buildings do their own thing and the relationships between them and the spaces in between make little or no sense.

The idea of the European Union is also that the whole is greater than the sum of the parts. We all have to give up something to get something more. You’d have to have a heart of stone not to see that.