The claim by the designer of the Soviet Union’s RBMK nuclear reactors that they were ‘safe enough to be installed on Red Square’ was believed.  That was until reactor 4 (RBMK type) at the Chernobyl nuclear power station in Ukraine literally exploded into the night sky at 1.23am on 26 April 1986 in the world’s worst ever nuclear disaster.

Serhii Plokhy’s award winning book ‘Chernobyl’ explores the context of communism, militarism and a rush for economic growth, through new technologies such as nuclear energy, that led up to the disaster, the disaster as it unfolded and the immediate and long term aftermath. It is a tale of the catastrophic coming together of a flawed and failing political system and an inherently dangerous nuclear industry. 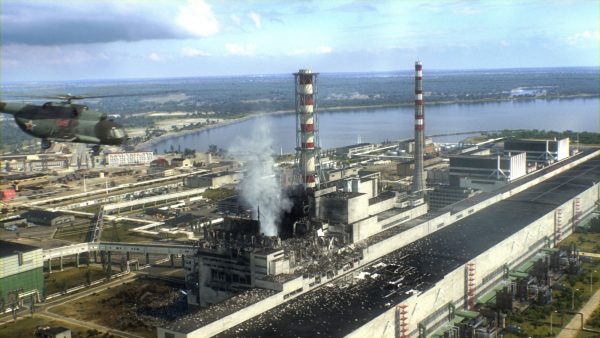 A Soviet army helicopter above Chernobyl reactor 4 shortly after the explosion. Sandbags were dropped in a desperate attempt to put out the fire.

Anyone involved in construction will recognise the pattern of impossibly optimistic targets, design and construction flaws, violations of rules and procedures and rank deceit and incompetence at all levels. Anyone interested in politics and history will be drawn into a tale of how after the event everyone lied to everyone else to protect their skin. The plant managers lied to local officials who lied to Ukrainian officials who lied to Soviet officials who lied to the Soviet politburo who lied to the international community about the nature and scale of the disaster and the risks involved. Earlier warnings would have saved countless lives. The numbers who have died or will die will never be known as so many deaths are not immediately attributable. There were 2 immediate deaths and a further 29 deaths within 3 months from acute radiation sickness (plant operators, firemen and helicopter pilots etc) but the United Nations estimate a further 4,000 cancer related deaths – a figure that Greenpeace puts at 90,000. The area around Chernobyl will not be safe for human habitation for 20,000 years. The half-life of plutonium-239, traces of which were found as far away as Sweden, is 24,000 years.

I remember a primary school trip to ‘Hunterston A’ nuclear power station and seeing the goldfish swimming in the cooling water in outside ponds to demonstrate its safety. I knew instinctively even then that the only science I needed to understand was Murphy’s Law. Right now reactor 3 at ‘Hunterston B’ has been shut down after the discovery of over 370 hairline cracks in the graphite bricks that make up the reactor’s core. Meanwhile the construction of the nuclear reactor at Hinkley Point C in Somerset continues despite it being unnecessary, too expensive and of an unproven design with no working example of the proposed reactor type anywhere in the world.