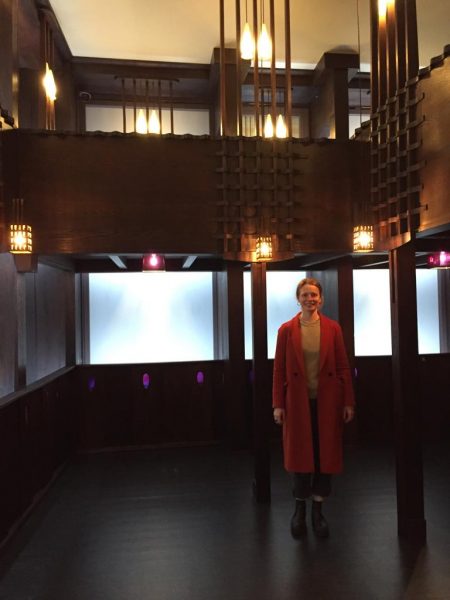 Here is our daughter Claire visiting the Scottish Design Museum at the V&A Dundee which opened last Autumn. She is in the Charles Rennie Mackintosh designed art nouveau oak tearoom interior. It was originally designed in 1907 and located at Ingram Street in Glasgow before being salvaged in an act of great foresight prior to the demolition of the host building in 1971.  Now 50 years later it has been reassembled in Dundee. Strange to think that all four of Claire’s grandparents might have visited this popular tearoom when it was in Glasgow. Whilst it’s the actual interior it’s not really the same ‘place’ as it no longer occupies the particular position in space and time that it once did. Still it’s wonderful to think that the design can be experienced again.

Mackintosh is a big draw on the cultural tourism circuit nowadays and like his reputation his built body of work is expanding not contracting. His 1901 entry into a competition set by German design magazine ‘Zeitschrift Fur Innendekoration’ for the design a ‘Haus Eines Kunstfreundes’ or ‘Art Lovers House’ was realised in Glasgow the best part of a century after it was designed and now acts as a popular gallery and exhibition space, events venue, café, artists studios and visitor attraction. 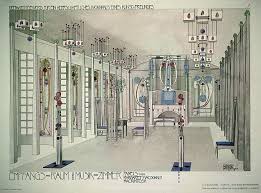 Then there is his best known building, the Glasgow School of Art, which was severely damaged by a second catastrophic fire in June 2018. Here the plan is to faithfully rebuild Mackintosh’s original design. This is surely the right approach because so much information exists about the building that a more or less exact reconstruction is possible. In construction, many contractors and specialist subcontractors are considered for work but only one team can actually carry it out when many could have done. In the case of the school of art a new team can now reconstruct the original design idea just as the original team did over 100 years ago.  Many blogs ago, when the issue was the rebuilding of the school of art library destroyed by the first fire in 2014, I suggested that because the library was a stand-alone design fitted into a simple box-like ‘shell’ within the building, more than one could be produced.  I still think this would be a viable idea and perhaps one of them could head north east to join the tearoom in Dundee.