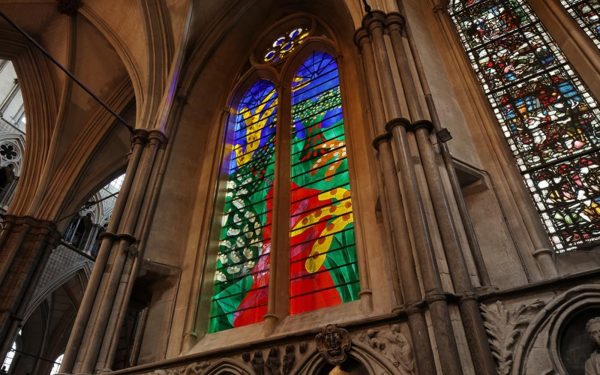 Was David Hockney having a laugh with his iPad design for the recently unveiled Queen’s Window at Westminster Abbey depicting a ‘country scene’ to commemorate the reign of Queen Elizabeth II? I mean it has garish colours and is totally out of scale and out of context with the gothic stone window frame, the north transept and the Abbey itself. It’s not in tune with the ‘spirit of place’.

He probably wasn’t having a laugh. This is what he does and I get it – the whole point is that it is out of scale and context and the colours are intended to scream out like a neon sign.

What I can’t decide is whether the choice of Hockney rather than a leading contemporary stained glass artist was dumb or inspired? Was this a totally bonkers choice and process where, like in the tale of the emperor’s new clothes, nobody felt able to state the obvious given that the Dean of Westminster and the Queen were involved or am I totally out of touch with the role of contemporary art in historic settings?

Once the novelty wears off etc……