‘I like complexity and contradiction in architecture’. The opening sentence of Robert Venturi’s timeless masterpiece is the most liberating sentence on the subject of architecture that I ever read because up until then I thought part of my job was to eliminate it. ‘Complexity and Contradiction in Architecture’ was first published in the USA 50 years ago in 1966 but it wasn’t until the mid 1970’s that the influence of the ideas that it contained had spread to the point where I felt compelled to invest a £4.75 of my student grant in my own paperback copy. Up until around this time my year group, and most of the architectural profession, expected to design in the pure white modernist ‘international style’ even though it should have been fairly apparent that it had run out of ideas and become a pale imitation of what it originally stood for. I remember doing a project for a white cubist yacht club at Gourock on the Firth of Clyde which was believable and almost contextual enough in a nautical kind of way but that was the last time I designed in that idiom.  ‘Complexity and Contradiction in Architecture’ was the start of the ‘postmodern’ rebellion against modernism and for most of us it was a liberation from what was effectively a modernist design ‘straightjacket’. 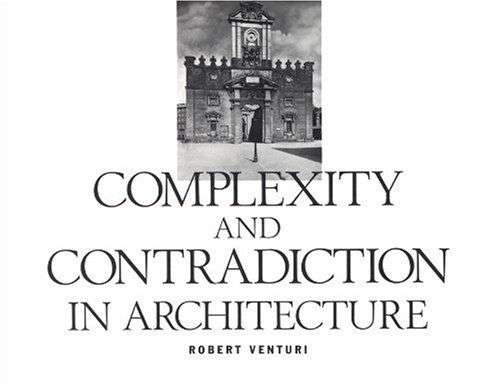 Being such a talented writer it’s best just to let Venturi’s own words speak for themselves: ‘Architects can no longer afford to be intimidated by the puritanically moral language of orthodox Modern architecture. I like elements that are hybrid rather than ‘pure’, compromising rather than ‘clean’, distorted rather than ‘straightforward’, ambiguous rather than ‘articulated’, perverse as well as impersonal, boring as well as ‘interesting’, conventional rather than “designed,” accommodating rather than excluding, redundant rather than simple, vestigial as well as innovating, inconsistent and equivocal rather than direct and clear. I am for messy vitality over obvious unity. I include the non sequitur and proclaim the duality. I am for richness of meaning rather than clarity of meaning; for the implicit function as well as the explicit function. I prefer ‘both-and’ to ‘either-or’, black and white, and sometimes grey, to black or white.’

The above quotes are all from the first page – Venturi’s point of view being that architecture becomes interesting when complexity and contradiction are introduced. His arguments are developed throughout the book with the aid of three hundred and fifty architectural photographs which serve both as historical comparisons and to illustrate the act of creating and experiencing architecture.

Whilst ‘postmodernism’ – the style that followed in the 1970’s and 80’s – came and went, corrupted itself by its often corporate paymasters and a lack of rigour (just as modernism was), later versions of ‘modernism’ were never the same. Today’s ‘contextual modernism’ (or whatever it’s currently called) owes a great debt to Venturi’s book. I re-read it and it has as much to say now after 50 years about resisting the easy orthodoxy as it had to say when it was first published.