The Italian architect Andrea Palladio (1508 – 1580) is widely held to be one of the most influential individuals in the history of Western architecture.  His work is smooth and elegant with harmonic proportions and often symmetrical planning being influenced by classical Rome and especially the Roman architect Vitruvius whose treatise on architecture in ten books De architectura became available in Italian translation around 1520.

Palladio was, in many ways, the first great professional architect and from 1550 onwards he carried out an ever increasing series of commissions for all types of buildings including palaces, churches and villas.  He published many books – the most famous of which is I Quattro Libri dell’Architecttura (The Four Books of Architecture) which in the centuries that followed spread his influence.  In London Inigo Jones and Christopher Wren embraced the ‘Palladian’ style and even the United States Capitol building and the White House in Washington DC are ‘Palladian’ style buildings.

Palladio’s reputation is founded on his skill as a designer of villas.  He was responsible for the re-birth of the classical villa in Italy and designed and built many fine examples in the Veneto region north and west of Venice.  Amazingly not only do many of these villas still exist as family homes (true sustainability) but many are open to the public on certain days and at certain times of the year.

A tour of the best examples of Palladio’s Italian villas is my idea of a holiday – especially in the spring when the microclimate in the Veneto is at its best with sunshine, flowers and comfortable temperatures of around 20 degrees.  Armed with no more than return air tickets and a car hire booking Diana and I flew to Verona and embarked on a leisurely circuit of the region loosely structured around the opening times of the villas we planned to see.

We started with a few days in the beautiful city of Verona amongst its layers of history which include the Roman amphitheatre (the Arena).  From Verona we drove in an unhurried clockwise direction.  The limited opening times for the villas allowed us to meander along exploring and spending time in places we would never otherwise have visited.

After an overnight stay in the hilltown of Asolo we started with the Villa Barbaro in the village of Maser (open Tuesday, Saturday and Sunday) located where the lower plain of the Veneto becomes more hilly as it approaches the foothills of the Alps.  The villa Barbaro is single symmetrical structure with a central residential building and side wings containing farm buildings.  The central residence features four engaged Ionic columns adapted from the Temple of Fortuna Virilis in Rome.  I was struck by how successfully some quite ordinary requirements had been configured into an amazing set-piece of architectural composition set into the hillside for increased dramatic effect.  Quite apart from the architecture the visit was worth it just to see the interior which contains magnificent frescos – principally by Paolo Verone. 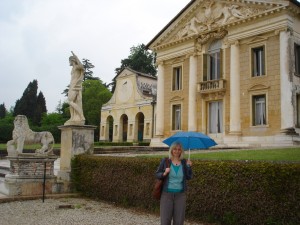 Diana at the Villa Barbaro in the rain 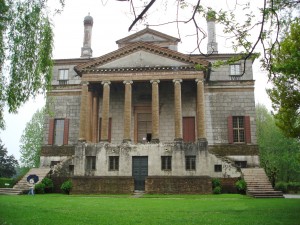 We followed this with the Villa Foscari (‘La Malcontenta’) (open Tuesday and Saturday) which sits on the banks of the Brenta river near the Venice lagoon.  It was is some respects a surprise that Palladio built in this location at this time since his classical architectural language, which was inspired by Rome, was seen as a threat to the individuality of Venice.  Sometimes referred to as ‘the most beautiful house in the world’ the Villa Foscari has a tall monumental monolithic structure with a central portico and pediment allowing it to completely command its surroundings.  Internally the building is centred on a lofty cross shaped hall with a sequence of more intimate spaces around it.  Various theories abound on the origin of the name ‘La Malcontenta’.  One of them is that the wife of one of the original owners was banished here for living too loosely in Venice!

We continued our journey to Vicenza.  Palladio is to Vicenza what Mackintosh is to Glasgow or Gaudi is to Barcelona and the city is full of fine examples of his buildings.  Three organised guided tours can be taken to visit some of Palladio’s most important works in and around the city but we walked the city ourselves which allowed us to continue at our leisurely pace.  I was most impressed by the imaginative brilliance of the composition of the Basilica Palladiana in the Piazza dei Signori – a project which was in fact the re-cladding and buttressing of the collapsing old town hall! 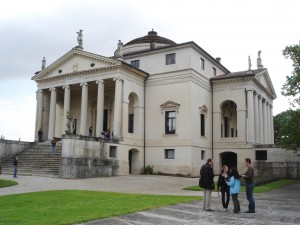 Outside the city we visited the Villa Capra (‘La Rotunda’) (open Wednesday) which sits on the top of a hill allowing its four symmetrical facades to look out over the countryside.  The building was designed as a summer house – surely the grandest and most sublime summer house of all time.  The plan has centralised circular halls with wings and porticos expanding on all four sides.  The central dome, one of Palladio’s most famous motifs, was itself inspired by the Pantheon of ancient Rome.

By this time we’d seen enough Palladio and it was time to come home.  We returned with the sense that it was a real treat to see ‘in the flesh’, so to speak, these buildings whose influence has been so far reaching – forming an important link between classical Rome and the classical revival in Europe and beyond.