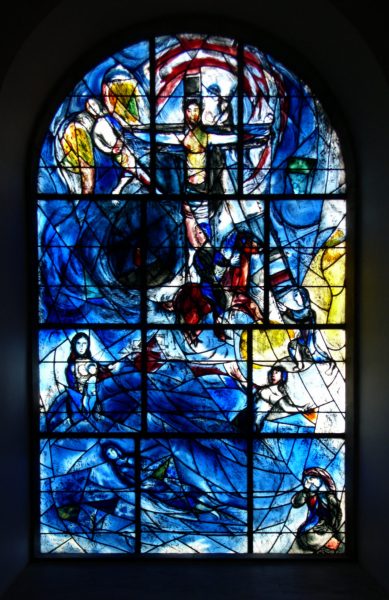 I’ve been meaning to visit ‘the church with the Chagall stained glass windows’ in Kent since a neighbour told me about it several years ago. The church in question is All Saints’ Church  http://www.tudeley.org/allsaintstudeley.htm which is hidden away in Tudeley near Tonbridge. Parts of the church date from before the Norman conquest but most of what is there today is from the 18th century.

All the more surprising then to find within the relatively small window openings of this solid little church the only example in the world of a full array of stained glass windows (twelve in total) designed by the Russian – then French – artist Marc Chagall.

An early pioneering modernist, Chagall was associated with cubism, fauvism and symbolism, creating works in virtually every artistic medium including stained glass (‘painting with light’) which he came to late in his career. Chagall’s involvement at All Saints’ is a sad story. He was commissioned by Sir Henry and Lady d’Avigdor-Goldsmid to design the magnificent east window in memory of their daughter who died in a sailing accident off Rye. When he arrived for the installation of the east window in 1967 and saw the church, he said, ‘It’s magnificent. I will do them all.’

We visited recently en route to Tunbridge Wells and it was well worth the visit. The simple exterior of the church does little to prepare you for the vibrancy of the colour, the quality of the light (even on a dull day) and the all encompassing completeness of Chagall’s vision. A Russian Jew, Chagall often included Christ in his work. He said that the windows, which feature animals, birds, butterflies and fishes were inspired by verses 4-8 of Psalm 8: 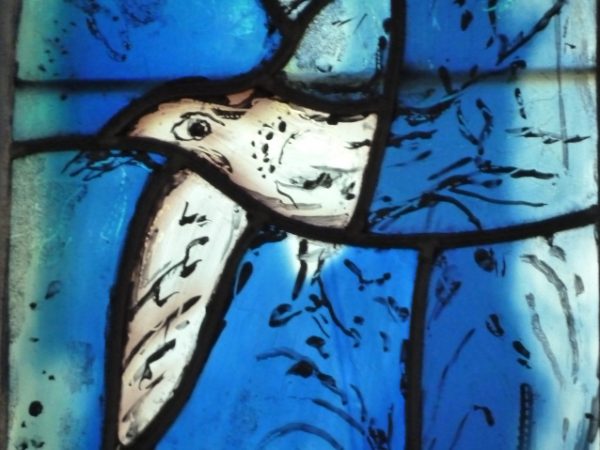 For thou hast made him a little lower than the angels, and hast crowned him with glory and honour.

Thou madest him to have dominion over the works of thy hands; thou hast put all things under his feet:

All sheep and oxen, yea, and the beasts of the field;

The fowl of the air, and the fish of the sea, and whatsoever passeth through the paths of the seas.